LG mobile is throwing its hat into the competitive India budget market with the planned launch of a new LG W series. Amazon India already teased the device suggesting it will be one of LG’s online partner, with a similar teaser page on LG’s India site.

The LG W-series is a new lineup of LG phones, and from the look of it, the series is targeting Samsung’s online only Galaxy series. We first saw a leaked image/render of the LG W10 yesterday, and here come more images. While yesterday’s leak revealed the whole device from the rear, today’s leak gives us our first real look at the opposite side.

The freshly leaked image reaffirms the previously revealed features of the LG W10. It will feature a display with the water-drop notch, thin bezels on both side, but notably, the image reveals a chin large enough to take up a fingerprint scanner.

We are looking at the W10 in a previously seen color, but now from the front view. LG had teased earlier that the device will be available in three radiant colors, presumably Purple, Blue and third color option, both with gradient finish.

Previously leaked images tell us the LG W10 will get a vertically stacked triple-rear camera setup with a red colored ring on the camera sensor. The camera details are still scarce. To its right is the fingerprint scanner, and further down below is the LG branding. Previous teasers also say the device will come kitted with a 4000mAh battery and with the Helio P60 or Snapdragon 439 SoC under the hood a “Pocket-Worthy Price Tag”. 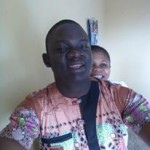 A graduate Dental Technologist, Android phones lover and a tech writer with focus on Mobile/ Hand held devices.You can interact with me on my Social Media accounts.

We’ve known for a while now that Google was readying a plot for Google Play Music in the Google graveyard. Nevertheless, it was still a bit of a surprise when the company announced that it would ditch Play Music for its YouTube Music service before the end of 2020. As a long-time Google Play Music subscriber, it definitely seems to me like […]

Vivo has been quite active in the budget handset market of India since a couple of weeks. It launched two Y series phones – Vivo Y15, Vivo Y12, – and there is at least one more Y series phones in its locker. Apart from that, the company also announced via a press release that it […]

Vivo Z1 Pro with Snapdragon 712 to launch on July 3rd?

The Vivo Z1 Pro is one of the highly anticipated handsets in India after the company officially teased the specifications of the online-exclusive series. Vivo had still not confirmed the launch date of the new handset but it was tipped to be this month on June 20. However, Vivo has swept away all speculation today […]